Coffee with Creme: A Rapid Rendezvous 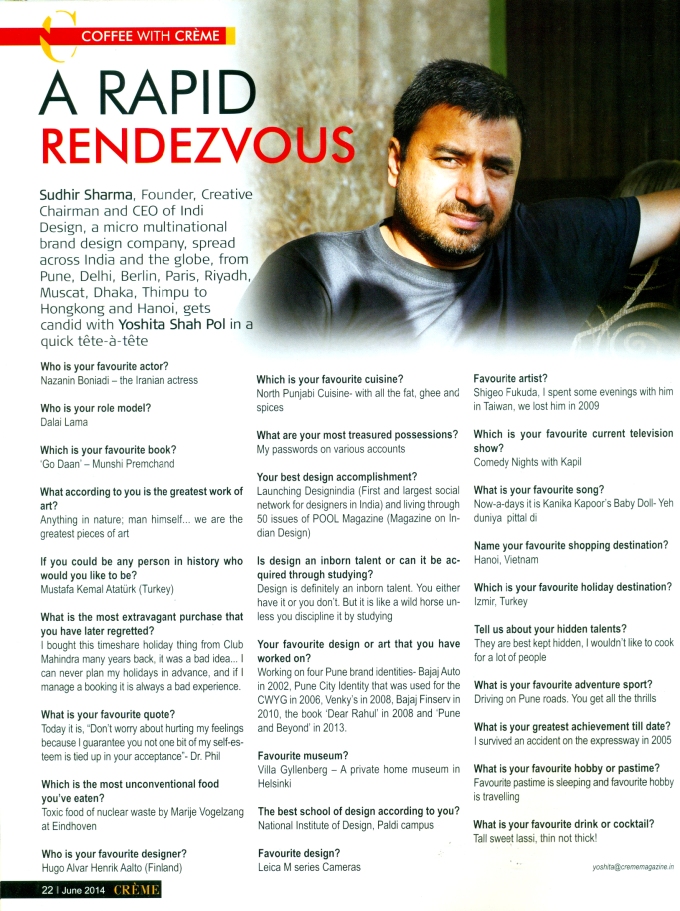 Who is your favourite actor?
Nazanin Boniadi – the Iranian actress

Who is your role model?
Dalai Lama

Which is your favourite book?
Go Daan – Munshi Premchand

What according to you is the greatest work of art?
Anything in Nature, the man himself..we are the greatest pieces of Art.

If you could be an y person in history who would you like to be?
Mustafa Kemal Atatürk (Turkey)

What is the most extravagant purchase that you have later regretted?
I bought this timeshare holiday thing from Club Mahindra many years back, it was a bad idea..i can never plan my holidays in advance, and if I manage a booking it is always a bad experience.

Which city do you call ‘home’?
Pune

What is your favourite quote?
Today it is “ Don’t worry about hurting my feelings because I guarantee you not one bit of my self esteem is tied up in your acceptance” Dr. Phil.

Which is the most unconventional food you’ve eaten?
Toxic food of nuclear waste taste by Marije Vogelzang at Eindhoven

Which is your favourite cuisine?
North Punjab Cuisine- with all the fat, ghee and spices

What are your most treasured possessions?
My passwords on various accounts..

Who is your favourite designer?
Hugo Alvar Henrik Aalto (finland)

Your best design accomplishment?
Launching Designindia ( first and largest social network for designers in India) and living thru 50 issues of POOL Magazine..

Is design an inborn talent or can it be got through studying?
Design is definitely an inborn talent..u have it or you don’t..but it is like a wild horse unless you discipline it by studying….

The best school of design according to you?
National Institute of Design, Paldi campus.

Favourite artist?
Shigeo Fukuda, I spent some evenings with him in Taiwan, we lost him in 2009.

Which is your favourite current television show?
CNWK – Comedy Nights with Kapil

Which is your favourite holiday destination?
Izmir, Turkey

Tell us about your hidden talents?
They are best kept hidden, I wouldn’t like to cook for a lot of people.
What is your favourite adventure sport?
Driving on Pune roads. You get all the thrills.

What is your greatest achievement till date?
I survived an accident on the expressway in 2005

What is your favourite perfume?
Armani code from Giorgio Armani

What is your favourite hobby or pastime?
Favourite pastime is Sleeping, Favourite Hobby is travelling

What is your favourite drink or cocktail?
Tall Sweet Lassi, thin not thick….:)